Image via WikipediaPoet John Donne once wrote, “No man is an island”.  I’m not so sure he was right.
At a July 4th party with neighbors and friends, I pretty much felt like the odd man out.  My fellow partiers are fully indoctrinated Texans.  I, on the other hand, still have plenty of New England moderate liberalism flowing through my veins.

Once upon a time, we were taught to vote for the best candidate.  Today, we are drawn to the candidate who belongs to the “right” party.  Right or wrong, on target or completely adrift is no longer relevant; only the party affiliation.

America has been at war for more than ten years, authorized by both Republican and Democratic presidents and a legislative branch that authorized the expenses.  Yet, one side of the debate has the audacity to blame the current President for the entire deficit and economic conundrum.  More amazingly, as the President tries to tactfully back out of Afghanistan (the longest war in American History), there are politicians who want to keep spending on the war while reducing social programs at the expense of the American people.  The endgame?  We’ll continue to lag in education, we’ll continue to fall behind China and India with innovation and manufacturing, and we’ll wonder how our nation has become a Third World country.

It would be comical if it wasn’t so terrifying.  Political factions, it would appear, would rather “bankrupt” the US government to avoid raising the debt limit.  I understand their desire to reduce spending.  Really, after being unemployed for 18 months, I still deal with my own mini-crisis.  But I also understand that cutting expenses wasn’t enough; at some point I had to bring in extra revenue.  Peter Sellers played a wonderful character, Chauncey Gardner, in the movie “Being There”.  The farce of the movie was an intellectually challenged gardener used metaphors that politicians translated into brilliant economic philosophy.  So, I suspect Chauncey would say, “to cut the blade of grass is not sufficient, one must water to encourage growth”.

Have you ever heard a politician say, “I don’t love my country?”  I don’t think so.  Yet, Republicans are threatening to plunge the government into bankruptcy, creating the potential for devastating long term effects on the US economy.  Some experts say such an action (or inaction) could crash Wall Street and create a depression equal to the 1929 stock market crash.   Where’s the love?  The Democrats aren’t any better.  They need to accept that budget cuts in key programs are critical to the success of restoring our out of balance debt.  Republicans need to accept that some taxes and exemptions need to end.
Part of the problem is with our leadership.  Even those of us who voted for Obama have been disappointed. He has stood on the sideline while Congress defended their side of the aisle.  Once he got involved, it would appear after much cajoling, the message got out that he would be willing to make “tough” budget cuts if Congress would eliminate some major loopholes.  A voice of reason?  Not really, since the extreme left still won’t budge on certain cuts; and the extreme right doesn’t want to eliminate their beloved loopholes and offend their big business contributors.
In the 2010 election, America sent a message to President Obama.  Republicans felt they were vindicated with their victories throughout our nation.  Yet, they are squandering their opportunity with petty bickering within their ranks.  The coffee drinkers, the tea drinkers and those who like to “sweeten” their beverages with moderate compromise.  The latter of course, attacked for their willingness to do what’s right for America. 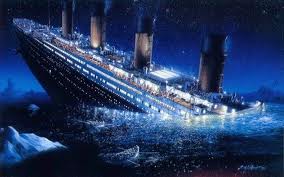 Here’s the really sad part, who wants to take a bet that from one of our highest election turnouts in 2008, the 2012 vote will be one of the lowest?  What message will politicians take from this?  No doubt they’ll tell us the message is heard, partisans of both parties are unhappy and not to worry, we’ll do more of the same.


John Donne continued in his poem, “Because I am involved in mankind. And therefore never send to know for whom the bell tolls; it tolls for thee.”   Pass the life preserver and pray we’re not aboard the Titanic.