The Thrill of Victory and the Agony of Defeat

Things had been looking up. Or, so I thought. The phone was ringing and finally it wasn't an annoying telemarketer. Job leads. A couple of managers actually had read my application materials and were expressing some interest. Maybe the economy really is turning around and hiring will pick up in 2011. 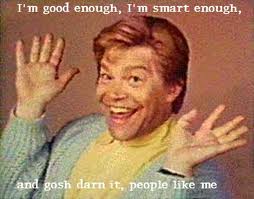 My wife and I have accepted the notion we'll most likely be leaving Texas. We're really not concerned about what part of the country calls us; just so that we can live comfortably and get some help moving there. How two people can accumulate so much stuff in so short a time is beyond me, but somehow we managed to run up a $7500 bill when we moved from San Antonio to Houston.

So the phone was ringing and I felt like I had won the lottery. Like Stuart Smalley used to say, "I’m good enough, I’m smart enough, and dog-gone it, people like me." OK, it was a bit for Saturday Night Live, and Al Franken was a bit nerdy. Look where it got him ... all the way to the Senate.

I was giddy. I had three different job prospects at the same time. If you've ever fantasized about how you would spend your millions when you won the lottery, you know how Jane-Ann and I felt. We went through a thousand "what if" scenarios trying to determine which would be the best opportunity. Two were out of state; the other was here in Houston. Although it meant a serious setback in salary and responsibilities, we decided if the local offer was made, we were here to stay.

The local interview was by committee, and I thought I held up to the questioning rather well. We spent more than two hours in the interview, and that was followed by a "test.” Since the "test" was computerized, and I was sitting at a computer with Internet access, I was able to "Google" the answers I needed. They gave me the resources, I utilized them.


The next interview also went well. We talked shop; made jokes, and didn't spill our soup at dinner. I knew an offer would come. And while I waited for that offer, a third interview took place. If I couldn't stay in Houston, this third opening was the one I wanted. Great company, great manager, great team; all that was missing was me. We could fix that. 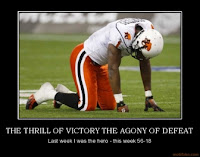 Now from the "thrill of victory" comes "the agony of defeat.” While traveling back from third interview, I got a call from the local manager. His message was bright, cheerful, and simple. "Hey Ed, please give me a call and let's talk.” Jackpot! No-one ever calls with bad news; least of all with that cheerful sound in their voice. Let the spending begin! I see an iPad in my future! Uh, hold that thought. The manager was actually calling to tell me they had filled the position with an internal candidate. Not the news I wanted to hear, but a classy guy.
After returning from my last interview, I immediately sent my thank you note. I expected a quick response, like: "I enjoyed meeting you, too.” After two days, I received a long, emotional response informing me he put the position on hold. He needed to give his staff a bit more time to respond to his plea to step up. If the timing had been better, I could have mentioned how that worked out for Wade Phillips. Two down-one to go.
The good news was I did get a firm offer from the first interview! But there were items that needed to be negotiated; certainly the earlier mentioned help with moving expenses. The manager was understanding and really wanted to put the deal together. He would go to bat for me and see how much more assistance he could provide. All other interviews took place while I was waiting for him to get back to me. But now that the first two positions had crashed and burned, I reached out for news. You don't need a magnifying glass to see this one coming: "Sorry Ed, the position has been eliminated from the budget.” It would seem I was fired before I was hired! Three down - none to go.
The thrill of victory. The agony of defeat. And still no iPad.
Posted by Unknown at 12:17 PM No comments: Links to this post It was my bad. I failed to follow my own advice. I routinely warn friends about random clicking on websites, because we rarely know where our information is being received. Worse, many sites track our every move. If I ate all the cookies that websites set, I'd look something like the Michelin Man. It's bad enough I'm challenging the Pillsbury Doughboy.
This past Tuesday, I spent some time researching private health insurance. My COBRA benefits from my most recent employer will expire next month, so it's time to get information for continuing medical coverage. I visited the usual websites, esurance.com; ehealth.com; AARP, Aetna, Cigna, etc. Here's the catch: Before they'll provide an "online" quote, they need to gather some information. Heaven forbid your height and weight don't line up against the charts or you have a rash that requires a prescription ointment. I acknowledge that I'll never make the cover the annual Fireman's Calendar. I am not blessed with a poster child physique. I like to think of myself as vertically challenged. And forget about "neglecting" to mention a pre-existing condition. Good luck getting a prescription covered for that minor lapse of memory.

After I filled in the information, thinking there were still a few steps remaining, I made my fatal error. Mouse click. Within five minutes my phone started ringing. Endlessly. One call after another with "good news, we found a plan that will take pity on your soul and cover you." The price range came in from $571 to $1600 monthly, depending on whether I wanted band-aid coverage or something more complicated like sterile gauze. At this point, I felt obligated to add another pre-existing condition: spontaneous heart attack. Health care reform? Honestly, I don't give a damn who is right or who is wrong. But Nancy Reagan's "just say no" campaign is not the answer to anything beside the war on drugs. Perhaps we can agree the status quo is not acceptable, and healthcare and the economy are connected at the hip. Or the thigh bone. You can finish it from this point.

Some of these online "brokers" were offering legitimate, if not absurdly priced products. Others were straight out fraud. Prenegotiated fees arranged by the bartering company. It isn't insurance. You pay 100% of their negotiated price. And you have the privilege of paying the barter company $450 a month for their negotiating skills. I'm not a health care expert, but I'm confident many people are being cheated out of their remaining funds.

The irony in this, is that a part of me finds this lead generation fascinating. For three months, I was promised "leads" by an Electrical Energy Provider as I tried to sell this commodity to area businesses. I received four dead-end leads. These leads were provided, not by online pre-qualifying contact, but rather by contractors like myself, who put their feet on the pavement and knocked on doors. Our cold calling goal was to get contract and provider information before we were tossed out of the business. We were developing leads for the big guys in the office and the contractors were pretty much disposable, since few of us would make a living while waiting for the potential client's energy agreement to expire.

Yet, in just a matter of minutes, no less than 30 sales reps had my phone number and basic information. My only consolation, is that at least 29 of them will get the same rejection that I received when knocking on doors. At least they didn't wear out their shoes.